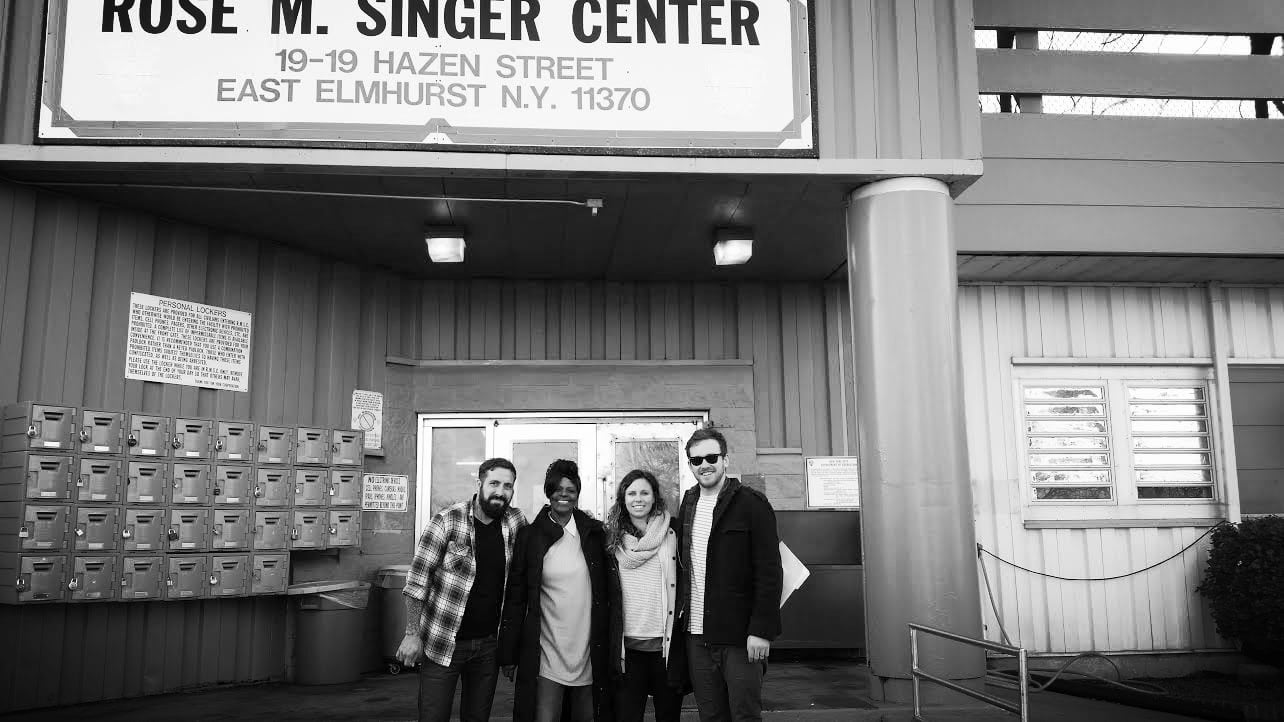 It's dawn, and we've just driven an hour and a half into New York City. We run on little sleep, since it's hard to make night owls go to bed earlier than 11 or 11:30. The sunrise is pink matching airport diner neon while my husband Aaron, and Nathan Lee and I are ordering coffee, drinking complimentary OJ out of little blue-jeweled juice cups, staring a little deliriously at the menu, and ordering something substantial that will last us until after lunch.

It's our second morning of the 4:30 am wake up call, and our second morning to go play on Rikers Island. Today, the van actually started (yesterday's wake up call was "now would be a good time to pray”). Today we are less concerned about the intricacies of actually making it there, or constantly showing our drivers licenses and badges, the string of security checkpoints, and setting up the speaker system in a classroom with chairs bolted to the floor. Yesterday, I was relieved to find that there was a staff bathroom we could use right around the corner from the room where I played. I was also relieved that yesterday the women didn't seem to hate me. We laughed together, sang together, and cried together.

Meanwhile, the same waitress as yesterday, sets our various breakfast choices on the pink-flecked table in front of us. This morning, we talk about farming. I've played prisons 4 times this year, and each time is different. I've begun to ask myself some tough questions about why I do this.

The nature of what we do in the prison is a lot like going out into a field and scattering seed, only we don't really get to see what grows. Handing 150 women books of my lyrics, singing songs I've written, and shaking hands, sometimes hugging, sometimes praying with one or two women on the way out doesn't sound like it would be enough to really accomplish anything.

I played and share for an hour each morning that we're there. All of the flights, driving, logistics, and security for two hours of being there. They have us play in the mornings because things are too tense in the prison by the afternoon. We're not running "programs," we're not necessarily even helping individual inmates on a one-on-one personal basis, and in most cases we don't hear their stories, and we don't develop relationships with them. And we're probably not qualified for that.

So much of what this time is about is trust. And how do you judge whether it "went great" or not? We half-jokingly say that it's a success if no one got hurt and everyone came out alive, which is mostly true. But really I just have to trust the Lord that praying with an inmate named Jennifer who is beaming through the tears she is crying is enough. That talking with Christiana, who tells me about their acting group (and to visit the north side of Brooklyn because it's beautiful) is enough. That today all of the women in green jumpsuits laughed about how I would get mugged in harlem--that that's enough. That me being myself, cracking some dumb jokes, sharing my songs and meeting these women right where they are is enough.

At the beginning of every day I read a quote from Anne Lammott from her book Small Victories (also, it turns out that Anne Lammott has a few fans at Rikers). She writes, "Hope is not about proving anything. It's about believing that love is more powerful than any grim, bleak shit anyone can throw at us." I think at the end of the day, the question I'm accountable to is: did I love these women well in the hour that I spent with them? At the end of the day, I'm a musician and a songwriter. I do what I do, and I get the joy of trusting God to do what he does.