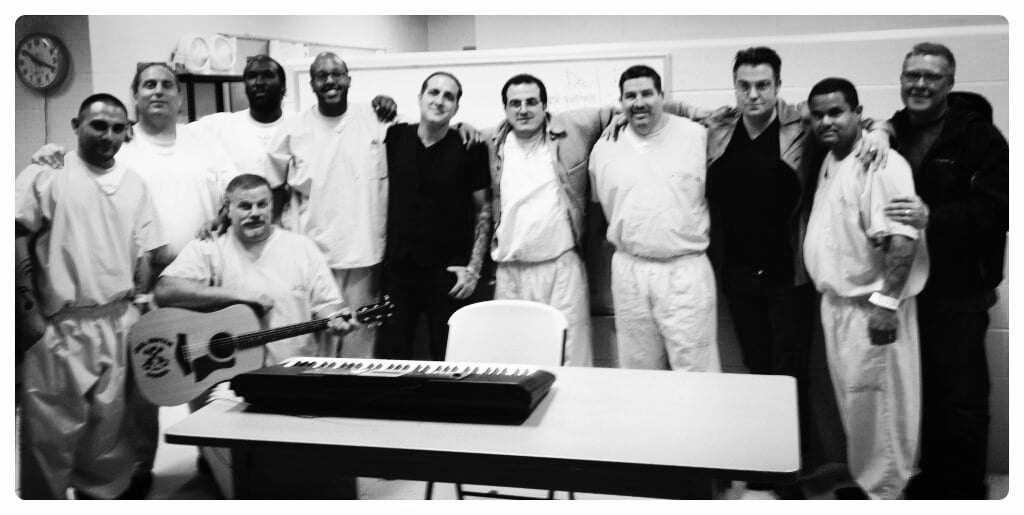 Waking up on Friday morning, amongst the fog of the early hour mayhem, I was reminded that this evening was to be spent with Nathan Lee, with the sole purpose of brainstorming ideas on how to shape “Send Musicians to Prison” for the upcoming year. I was excited to get away for an evening and get some hang time.

My heart had been heavy for Nathan this week, as I knew he was spending time with a friend down in San Diego who was under house arrest and awaiting trial. Heavy, heavy stuff to deal with, be a part of, and at the same time, love unconditionally. So, with all that in mind and understanding how deeply affected Nathan’s heart was, my expectation was that we were going to experience an evening of calm yet effective conversation whilst planted firmly in one area.

From the minute I pulled up to the hotel and saw Nathan on the phone with that “Here we go, this is going to be interesting” look in his eye, & I realized other plans were about to follow.

Fast forward a couple hours and we find ourselves driving a fair distance to meet up with Deputy Dave Bates, along with two other deputies who work for the LosAngeles Sheriff’s Department. These men are spear heading the Education Based Incarceration (EBI) program for LA county. Our plan was to catch up & talk through some ideas over a meal and call it an evening.

Upon arrival to the restaurant, not only do we meet up with Deputy Bates and his co-worker Deputy Z, we also had the privilege of meeting their wives for the first time, which was a great experience in and of itself. It was an honor to sit and listen to stories told from a wife’s point of view, and get a glimpse into what their husbands do daily. Brant Chaote joined us for dinner as well, and it was great to hear a little more about how his role as an educator, is encouraging both inmates and deputies alike. He believes in allowing human beings, regardless of circumstance, to catch a vision and believe in their value…….and he understand that it takes time. Needles to say, this meal helped our relationship grow beyond the logistics and organizational routines. Relationship matter more than anything. We were reminded that Jesus made it a priority to get to know people around him on an intimate level. We were reminded that we must crawl before we walk.

You may be questioning some of the intricate parts I’m expanding on, but I truly believe that in order to understand what really goes on in a single day of “Send Musicians to Prison”, you must have a deeper glimpse at what used to seem flipping surreal! Not any more.

During our time at dinner, it was amazing to hear about ideas that were birthed at the beginning stages of the EBI program, and then to hear how ideas became a reality.  Listening to stories about past dreams that have come to fruition sparked even more enthusiasm for the future of the EBI department, and our involvement as “Send Musicians to Prison”.

So, as we were wrapping up dinner, Deputy Z brought up an idea. At 9PM mind you, He suggests we drive over to the station house he runs in another county 30 minutes away. His invitation enthusiastically included a very strong premise for us to sing a couple songs, speak to and pray with 10 inmates on good behavior, who reside at the station house. Nathan looks up without even thinking and says “YES, LET”S DO IT!!!” as he’s grinning from ear to ear.

While driving to the station house, Nathan and I realized that God was laying out a perfect evening. I was also reminded of the sobering fact that neither of us had lyric books or instruments. We had to trust in faith, and that whatever was in motion was going to allow freedom to rule freely in the environment we were about to be in.

As Nathan stood in front of these 10 men an introduced us and explained a little of what we are involved in, there was a tangible sense of peace that settled in the room. We were able to share our stories and sing some songs of hope that I trust encouraged them. These gentlemen were serious about getting their life back on track. The mutual respect between these inmates and the Deputies was amazing to see. These men were hungry for the truth and I knew they wouldn’t settle for anything less. They craved truth to be spoken into their lives in order for an authentic transformation to take place, so they would never return to a place of incarceration.. ever!!

After we sang, they sung for us. After we prayed, they prayed for us. After all was said done, and we were about to depart, the evening was highlighted by a compliment from one of the inmates. His words were spoken with a grateful spirit as he explained how these two Deputies have shown love, compassion and a gentleness that they have never experienced from officers of the law. He continued to thank their wives for “loaning” their husbands to them. We were reminded how important the EBI program is.

In Nathan Lee's willingness to go, wherever & whenever called upon, there’s a chain reaction that we don’t often get to see…..but I think we caught yet another glimpse of what God does through obedient hearts.

Here’s what I take away from this Friday night in January……Do we sit in comfort and talk about what we’re gonna’ do? Or do we walk one step at a time, in Faith, to do what we have been called to do? We are called to Love the Least of These….and no one….is above the Least Of These!